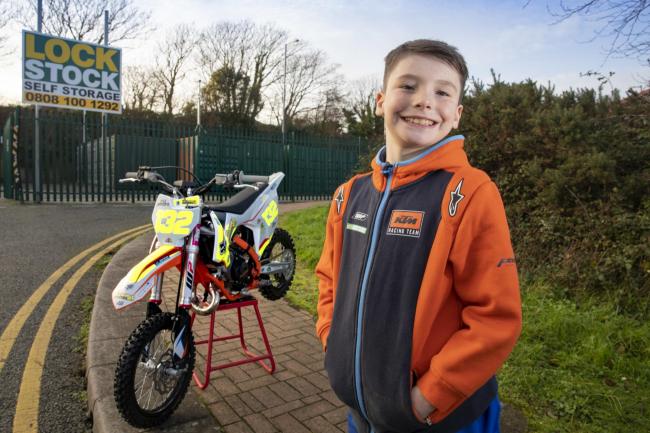 A NINE-year-old from Anglesey is aiming to make a big splash in his second season in the mad and muddy world of motocross – on a bigger, more powerful bike.

Kyle Jeffcoate, from Holyhead, cut a dash in his first year in the rough and tumble of this fast-paced sport and is looking ahead to more competition when the new season starts this spring.

He has been backed by leading storage company Lock Stock Self-Storage, which has 20 storage parks across North Wales and Cheshire including one in Holyhead, where Kyle’s dad, Darren, provides the security service.

Kyle might be small in stature, but he made a big impression in his first full season in the Cheshire North West Schoolboys Series.

There, he competed in the 50cc class and finished fourth, qualifying for the Cheshire team for the National Championships at Oxford, where they also finished fourth.

Darren, a keen motocross rider himself, said: “I’ve always preferred bikes to cars and I’ve got two motorbikes, one of them a motocross machine.

“Kyle had a go because his older brother, Koren, took it up, but he’s stuck at it and has the talent so after a few lessons we thought we’d chuck him in the deep end and he’s done really well.

“He has now moved up from the 50cc KTM bike to a 65cc version with gears, which will do more than 60 mph, and he has spent the winter getting used to it at various sites across the UK.”

Kyle, a pupil at Ysgol Rhyd y Llan, Llanfaethlu, will again be competing in the Cheshire Series, with the first event scheduled for March.

Holyhead storage site manager Lee Hanson said: “Young Kyle is very good and it will be great to see him competing.

“It’s brilliant that we’re able to help young Kyle. Lock Stock do support so many good causes and charities and like to get involved in the communities where they operate.”

Darren added: “He’s got the enthusiasm and determination to get to the front – he doesn’t like being behind anyone.

“In his class the bikes are quick and he’ll be up against boys who are bigger and older than he is and we’re just grateful to Lock Stock for helping give him this chance.”

Lock Stock, founded in Denbigh in 1999, is the UK’s largest containerised storage company with more than 3,000 units, providing in excess of four million cubic feet of space at 23 parks across North and Mid Wales and the border counties.

Its existing sites stretch from Holyhead and along the North Wales coast at Caernarfon, Bangor, Llandudno, Abergele and Rhyl, on the Dee at Flint, Saltney, Deeside and inland at Denbigh, Mold, Wrexham and Newtown in Powys, and at Oswestry and Shrewsbury in Shropshire.

For information about Lock Stock Self Storage, including off-site container hire, visit us here. .

No comments to show.

Similar to a double garage – so two cars (end to end). Will swallow the contents of a three bed house or enough stock, especially if neatly racked out, to feed an ebay business or furniture removal company. Tradesmen with vehicles and large equipment find them ideal.

Many people use this size to store furniture during house moves – it has the capacity for the contents of a small bungalow. Also, they are ideal to store equipment, tools and materials for builders and other small businesses. Hobbyists – rally drivers (cars), water sport enthusiasts (jet skis) etc. – find them to be perfect for seasonal storage.

Many people use this size to store sports equipment or seasonal items not regularly in use. It’s ideal for students during holidays. Plenty of small businesses also use the 10ft size for stock, materials, tools and equipment and a 10ft unit will easily accommodate contents of a bedsit.